Torque wrenches are basic tools which provide safe and accurate assembly of bolted joints. Let us take a look at how they work and learn about the wide selection of these tools on the market.

What is a torque wrench

A torque wrench is a tool used for tightening or, less frequently, loosening bolted joints (screws and nuts) with a precisely defined force, or, more precisely – with a torque. Tightening the connections with a certain torque is crucial when installing and servicing various appliances. When adjusting the torque to the bolt connection, you should always follow the engineering guidelines.

The torque is the vectoral product of the force applied to the lever arm and the length of the lever. The torque is expressed in Newton metres (Nm). It means that if the bolt is tightened using a 50-centimetre long wrench with the force of 100 Newtons, then the torque which will tighten the screw thread is 50 Newton metres. In the UK and the US, torque is referred to using a different unit, namely a foot pound-force (ft lbf) – 1 Nm is approximately 0.738 ft lbf.

The tightening torque of the bolted joint affects the force that the screwed elements apply on the whole structure. In order to understand the importance the tightening torque, you need to comprehend the mechanics of the screw thread and its tightening process. Generally, a bolt can be compared to a spring. The more tightened it is, the more it extends and the stronger it tightens the bolted elements. Tightening the bolt extends its length proportionally to the applied torque, but this length is limited – just as it is the case with a regular spring. Once the yield strength of metal is exceeded, the spring will not return to its original shape. The same applies to a bolt.

An over-tightened bolt which is a subject to constant tension, will not apply enough force and most likely cause damage to the device – either through loosening (e.g. caused by vibration) or breakage of a deformed bolt. The bolt won’t be able to return to its original shape, so loosening and re-tightening it won’t be a safe solution. 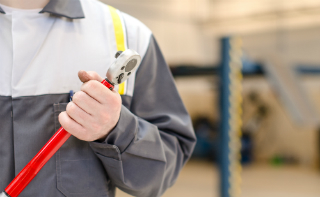 In order to tighten the screw properly, the appropriate torque must be applied to it. To measure this torque, you need a torque wrench. Selecting the optimum tightening torque guarantees the following:

It is necessary to know the value of the torque with which the connection must be tightened. It depends e.g. on the material of the components, the size and the thread pitch, as well as the specific application.

When a threaded joint is not tightened enough, it can loosen further, e.g. due to vibration or the movement of the joined components. If, on the other hand, a bolted joint is overtightened, the thread material stretches and can be weakened, resulting in damage. It may have a permanent impact on the threaded components and, as a result, render them unusable. Overtightened bolts should be replaced with new ones.

Both under- and overtightening of a bolt may cause a malfunction. It is important to tighten each bolt or nut according to the values declared by the manufacturer. A tool used to apply a specific torque is a torque wrench. If properly calibrated, it improves safety and reliability of each critical threaded joint.

What are the types of torque wrenches?

Most of the time, a torque wrench works like every other wrench. Only when the required torque is reached, the wrench mechanism is triggered. It prevents the wrench from exceeding the desired torque.

Other torque wrenches available on the market are, e.g. break-back torque wrenches. The mechanism of these wrenches makes the upper part of the tool “breaks” by about 20 degrees after obtaining a given torque.

A separate group of torque wrenches are those equipped with a dynamometer, but without a torque limiter. Such a tool shows the value of the torque with which we are currently tightening a bolt or nut. In this category you will find simple beam and scale wrenches, but also complex electronic tools, often with a computer interface and memory which allows you to log in the number and torque of connections tightened during the day.

What is the purpose of a torque wrench 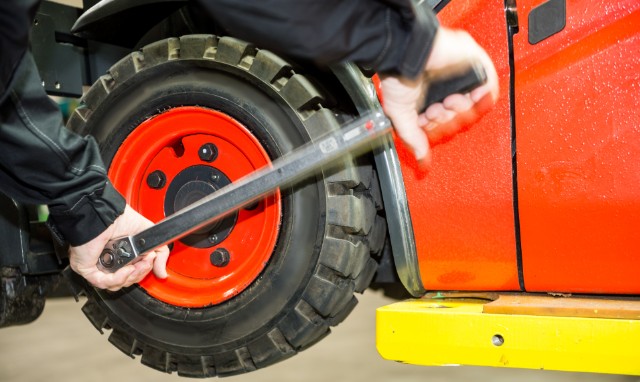 Torque wrenches are used in many areas of industry – wherever it is necessary to tighten components with a precisely defined torque. The basic application of a torque wrench is mechanic engineering – it is used in car workshops and other similar places where it is necessary to precisely tighten mechanical elements. However, these are not the only applications of torque wrenches. These tools are also frequently used in different fields of electronics and energy.

Torque wrenches are commonly used for tightening precision coaxial connectors in high-frequency systems. N, SC, SMA, SMC, SSMA SSMC, SSMA or TNC type connectors need to be tightened with the right torque to achieve their designed impedance and reduce losses. In addition, tightening such connectors with the right torque guarantees that the connector will not be damaged and it will be possible to repeatedly connect and disconnect it without deterioration of its electrical parameters. Another application of torque wrenches is tightening power busbars. Their use ensures optimal contact and low resistance of the connection.

However, such wrenches are used not only in mechanics or electronics. There are torque wrenches for such unusual applications as... dentistry – it is necessary to tighten dental implants with a specific torque in order to make them fit the human body perfectly.

The accuracy of torque wrenches, regardless of the application, is regulated by strict industry standards. The most important that are recognised in our country are:

How to choose the best torque wrench for your workshop?

Many types of torque wrenches are available on the market. The most commonly used ones include:

Beam wrenches are the most difficult of these three types to operate, but at the same time they offer the highest precision, which is surpassed only by very expensive electronic wrenches. Click-type wrenches are slightly less accurate, but they are sufficient for most applications, especially considering how easy it is to calibrate them. For most applications it is therefore best to choose this type of a tool.

The basic parameter of a torque wrench is the torque or the range of torques with which the screws can be tightened. The available ranges are vary from 2,5 Nm - 25 Nm up to 80 Nm - 400 Nm. WERA offers wrenches covering the entire range, so you can easily select the wrench for each application.

Torque grips are equipped with standard 1/2", 3/8" and 1/4" socket heads (depending on the size and torque range). These wrenches are complemented by standard socket accessories, such as joints or extensions.